It was another warm and sunny day.

I woke up a little later than usual and made myself a nice breakfast of peameal bacon and fried eggs.

I tried to fish for a while but the lake is very shallow and I had no luck so I decided to go for a hike. They have 3 nice trails of varying lengths ( 7 km, 12km and 22 km). I decided to hike the 7 km trail which took me up for a nice view one of the adjacent lakes. 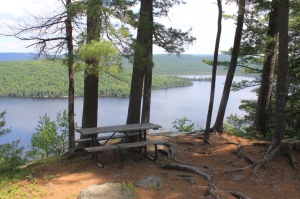 During my hike I saw a few small creatures but I was only able to capture a couple of them with my camera.

I saw a couple of grouse, but the one in this pictures was the most interesting because it put on quite a display for me in an attempt to get my attention. I am sure that it was trying to lead me away from its nest because as I continued down the trail, it chased after me for while. 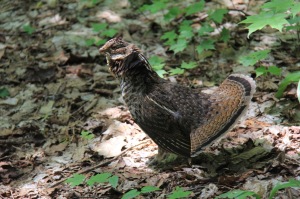 I was hoping to see a massasauga rattlesnake, but all I saw was this garter snake.

I decided to eat some hamburgers for supper and when I went to get the package I noticed that they had thawed out because the 12V cooler was not keeping them frozen, so I cooked all of the hamburgers, ate 2 and put the rest of them away for a rainy day.

I tried some fishing again but I had a problem with my new reel. It appears to be spinning faster than the line is releasing so it was getting tangled. It is easy to ‘ untangle,” but I need to set it up so that it releases properly. I never claimed to be a good fisherman, but I keep trying. Oh well, that will be a project for another day.

Shortly after 10 pm, my campfire was almost burned out, so I had slipped into my tent to go to sleep. I wasn’t in my tent more than 5 minutes when I heard some rustling outside and I peaked out to see a fox, sniffing around my campsite. His tail was longer and bigger than he was. He walked down my path to the waters edge sniffed around some more and then left. I keep all of my food and leftovers in the car so he didn’t find anything to eat. Note to file – you can’t take a picture through the tent screen at night. However, I did get a closeup of the screening. From now on I’ll keep my camera closer at hand.

I plan to leave early tomorrow morning for the 11 hour drive to Thunder Bay, where I hope to set up camp for a couple of days before heading to Manitoba. Hopefully the campsites have showers. After 2 days without a shower and covered in bug spray and musk oil, I can scare away anyone and anything except the mosquitos, which are only temporarily deterred by the smell. It’s a good thing there are no moose around here. With my luck I would attract a bull moose and I have no one out here that I can out-run.