After a restful nights sleep, I headed west on I90, crossed the Wyoming border and stopped at the Information Center before making a side trip to the ‘ Devil’s Tower ‘. This unique ‘ igneous intrusion ‘ ( or mountain, for lack of a better word ) was well worth the side trip. I walked around its circumference and took numerous pictures especially of the people climbing it.

Leaving the Devil’s Tower I had already made up my mind where I was going to stay. When I saw the name on the map I knew that there was only one place I could to stay, and that was Cody ( my family would understand why ), which is an hour east of the Yellowstone entrance.

The landscape in Wyoming is very interesting, as were all the states that I passed through. Whereas, the other states had vast farmlands, Wyoming has more rocky terrain that is less suitable for farming. Nevertheless, it has a lot of interesting sights. The mountain passes had winding roads through majestic forests and I saw eagles, deer, bison ( aka buffalo ) and prairie dogs.

I met several interesting people on the way. On Sunday, I met a fellow originally from North Carolina, now living in South Dakota, who had frequently gone to Tillsonburg, Ontario to pick Tobacco during his youth. On Monday, I met a couple who have a relative in Grimsby and a fellow who liked my bike because it was built in Germany, which he had left many years ago to come to America. I also met a couple of fellows from North Carolina who were riding the new BMW 1600 motorcycles. They had 16000 miles on there motorcycles compared to the 15000 I have on mine.

There are occasional thunderstorms forecast for the next 3 days in the Yellowstone area so I am planning to get a site for 3 days in the park and see what happens.

Can you spot the climbers on the tower? 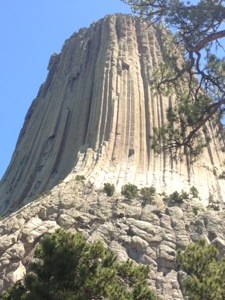 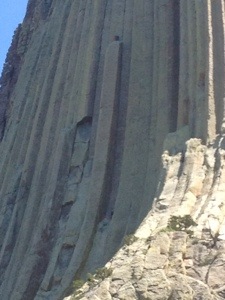 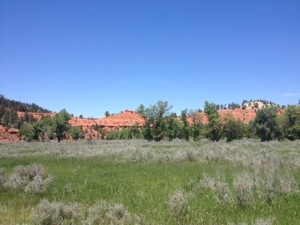